A study with 400.000 participants being conducted by researchers at Apple and Stanford is to determine whether a wearable technology can identify irregular heart rhythms suggestive of atrial fibrillation.

A clinical trial to determine whether a smartwatch app that analyzes pulse-rate data can screen for a heart-rhythm disorder has enrolled more than 400,000 participants.

Researchers at Stanford Medicine, in collaboration with Apple, launched the Apple Heart Study last November to determine whether a mobile app that uses the optical sensor on the Apple Watch to analyze pulse rate data can identify atrial fibrillation. The condition, which is characterized by an irregular heartbeat, often remains hidden because many people don’t experience symptoms. Atrial fibrillation can increase the risk of stroke and heart failure.

A paper describing the design of this unique clinical trial, the largest screening study on atrial fibrillation ever done, was published online Nov. 1 in the American Heart Journal. Enrollment, which was conducted through an iPhone app, is now closed.

It’s the largest screening study on atrial fibrillation ever done

“We hope this study will help us better understand how wearable technologies can inform precision health,” said Lloyd Minor, MD, dean of the School of Medicine. “These new tools, which have the potential to predict, prevent and manage disease, are finally within our reach.”

“The advantage of the app that uses the optical sensor is that it can check for an irregular pulse multiple times throughout the day in the background, without needing the user to actively engage the application,” Perez said.

Goals of the study

Each year in the United States, atrial fibrillation results in 130,000 deaths and 750,000 hospitalizations, according to the Centers for Disease Control and Prevention. The CDC estimates that the condition affects between 2.7 million and 6.1 million people. In addition, another 700,000 people may have undiagnosed atrial fibrillation.

Each participant in the study is required to have an Apple Watch (series 1, 2 or 3) and an iPhone. An app on the phone intermittently checks the heart-rate pulse sensor for measurements of an irregular pulse. If sufficient episodes of an irregular pulse are detected, then the participant receives a notification and is asked to schedule a visit with a doctor involved in the study. Participants are then sent electrocardiography patches, which  record the electrical rhythm of their hearts for up to a week. The goals of the study are threefold: to determine how many among those who receive irregular pulse notifications are found to have atrial fibrillation on ECG patch monitoring; to determine how many among those who received an irregular pulse notification go on to get medical attention; and to determine the accuracy of irregular-pulse detection by the watch by comparing it with the simultaneous ECG patch recordings. 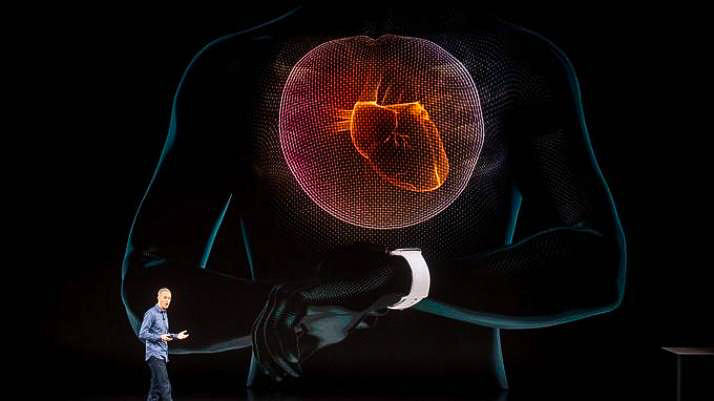 “We now have access to high-quality sensors that can measure and detect changes in our bodies in entirely new and insightful ways without even needing to go to the doctor, but we need to rigorously evaluate them,” Turakhia said. “There’s never really been a study like this done before.”

A subset of the study data was used by Apple as part of its regulatory submission for FDA clearance of the smartwatch app that analyzes pulse-rate data. Apple Heart Study investigators were aware of the submission, but have not seen the submission data.

“We are inspired by the overwhelming response to the Apple Heart Study,” said Sumbul Desai, MD, vice president of Apple. “Through the combined power of our participants, Apple Watch and Stanford Medicine, it’s one of the largest and most novel atrial fibrillation studies to date.”

Researchers from the Lankenau Heart Institute, Jefferson Medical College, the University of Colorado School of Medicine, Cooper Medical School of Rowan University, StopAfib.org, the American Foundation for Women’s Health and Duke University also contributed to the paper. The Apple Heart Study is funded by Apple Inc.