Digital diabetes solutions would never launch without smart consumer devices. The constant increase in the penetration of smartphones and tablets is one of the most fundamental drivers of the digital diabetes market.

As Research2Guidance estimates, between 2015 and 2017 the global penetration of smartphones and tablets grew from 42% to 64% of the total number of diagnosed diabetics. As a result, two thirds of the global diabetes population are within the reach of digital solutions by now. At the same time, the number of active users of digital services increased to nearly 5% of the addressable market.

Advances in smart consumer devices also drive connectivity in traditional diabetes medical devices, such as blood glucose metes. Just four years ago, only a few apps could connect to a sensor, or import data from other apps to track activities or nutrition intake. Now app and sensor connectivity has become the standard for leading app service offerings. The majority of newly released apps and updates allow a user to directly import glucose meter readings from an app, either via Bluetooth connectivity or plug-in solutions.

The evolution of medical device connectivity has also changed apps. The diabetes apps are increasingly getting device-agnostic, i.e. connectable to multiple external devices. This has significantly improved device interoperability. Most of leading publishers seek to establish partnerships with as many device manufacturers as possible. As a result, the market is evolving into an open device-agnostic ecosystem, in which customers are not dependent either on a single glucose meter or a single app to keep consistent data records.

Digital diabetes solutions would have not become popular had they not evolved into mass consumer offerings. In the last two years, diabetes apps and connected web services became more consumer-oriented, with the appeal to lifestyle and aesthetics. Just some three years ago, the majority of diabetes apps were simple data display screens or gamification attempts which had mostly failed. These apps would compete on the number of data points they could show on one screen, with little regard for design and user experience. Yet over the years, publishers learned that they would struggle to retain users if their apps were unappealing in finish. In 2015, OneDrop app was launched that set a new market standard for both design and marketing. Many others have used it as a blueprint since then.

Following changes in the design of apps, devices have also become trendier. Similar to the case of apps, a focus on device design is also meant to appeal to the consumer side of diabetes patients. Many digital diabetes care providers have paid a lot of attention to making their products resemble stylish gadgets rather than medical devices. 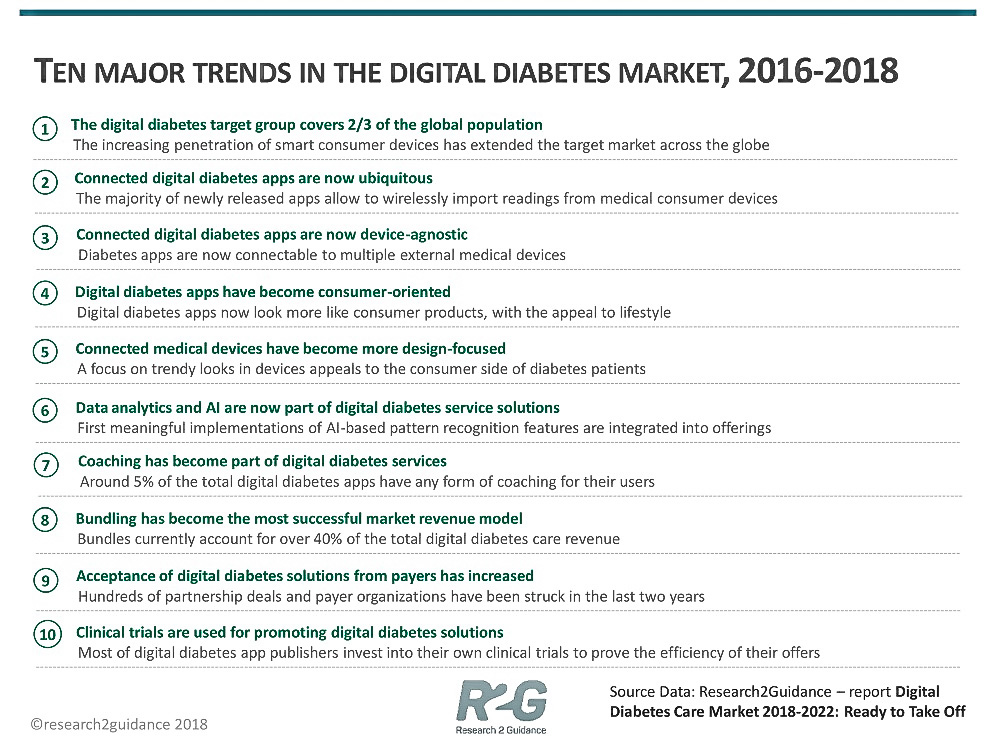 Digital diabetes care solutions have become smarter not only in terms of connectivity. Over the last two years, much effort has been put into adding AI into the digital service offerings, leading to the first implementations of meaningful data analytics. Currently, the output of these efforts is limited to pattern recognition and automated chat bot conversation solutions. Although AI-based services cannot still compete with human care in terms of quality, the first implemented AI features will act as a reference for competitors. New and improved AI-based service offerings will be one of the most important developments in the foreseeable future.

Digital diabetes solutions have expanded outside of the app, embracing more traditional services. Currently, the increasing number of companies is successfully implementing digital coaching services. Today, around 5% of the total digital diabetes apps available have integrated various forms of coaching for their users.

The evolution towards complex digital diabetes care solutions resulted in the growing popularity of bundles, which have become the most successful revenue model and the main revenue source in the market. A typical bundle includes an app with various features and content, connected devices (connectors, meters, pens, and/or pumps), a test strip supply, accessories (carry cases), and coaching services. Despite the fact that bundles are offered by less than 5% of today’s digital diabetes app publishers, they generated over 40% of total digital diabetes care revenue in 2017.

65% of all downloads in the diabetes app market are generated by only 14 app publishers.

Bundled offers have proven to be capable of making a real impact in the diabetes care. As a result, the acceptance of digital diabetes offers by payer organizations is growing, driving the demand for digital diabetes solutions to a new level. In the last two years, hundreds of new partnership deals between a payer organization and a digital diabetes care company have been reported in the North American region. Other regions have shown a slower flow of announcements of partnership deals; yet they are gaining momentum in major West European markets as well.

The acceptance from payers has been significantly facilitated by clinical trials, which have become indispensable for promoting market solutions. Most of leading digital diabetes app publishers have invested heavily over the last years into their own clinical trials in order to prove both clinical and economic efficiency of their offers. Nearly all the major players are now able to show patients the outcome of their digital diabetes care solutions. Few of them also link their services to cost savings that can be achieved by using digital solutions for diabetes care. Although many of such trials still lack scientific substance and economic vigor, they have become a powerful marketing tool to promote offers to consumers and payers.

The trends provided above are not suggesting that the digital diabetes care market has already seen its breakthrough, which is yet to come. However, it has all the components to evolve into a mass market in the future: a huge target group, innovative consumer-oriented products and services, working tools for HCPs and payer organizations to support patients, and a proof of concept. In other words, it is ready to ‘take off’ now.