One question to Dr. Bertalan Meskó, director at The Medical Futurist Institute. You have personally tested many new innovations. What is your personal experience with health trackers? 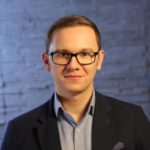 Let me answer that through a story.

My childhood dream was to become an astronaut. There are many others who also have space travel as their life goal, but I actually started to exercise six days a week just to achieve this purpose – and I still do. However, on 27 March 2016 I suffered a heavy muscle inflammation due to over-straining. I felt crushed. I had to stop exercising for more than two months. This period had a serious negative effect on my emotional as well as my cognitive health. I knew I had to somehow solve how to do some sport every day, otherwise my brain could not focus hard enough – therefore preventing me from working as effectively.

Technologies will continue to advance at an amazing rate

My most useful aid was DATA. I chose Fitbit mainly due to the GPS-factor, the design and the widely known brand – it was the first watch to include all-day fitness tracking. So I started using it every day.

Until my muscle inflammation, I worked out every day for 30 minutes on average. After 27 March 2016, my daily average dropped to 10.9 minutes, and this lasted for the more than two-month long rest period. Once I could start my recovery, and I bought my Fitbit, I was able to increase my average workout to 41.2 minutes per day (!). My performance skyrocketed due to Fitbit. I had the motivation, of course, but I have to admit I could not reach this level of activity without the data. I realized that I was running, playing football or doing more TRX workout because I wanted my results to look better on my Fitbit-screen. It might sound silly, but it does work.